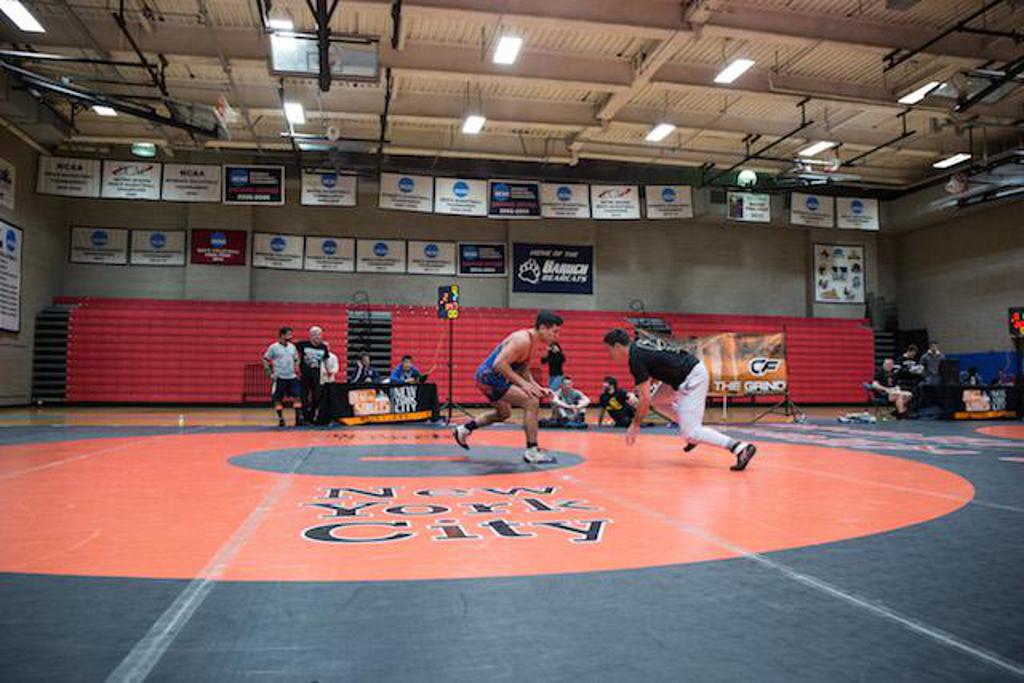 (All photography by Chris Barr)

On Saturday, March 11, the second annual Step Into the Circle (SITC) took place at Baruch College. The adult wrestling tournament, whether through the 15 teams and 46 wrestlers who stepped into the circle or the supporters who donated to their teams, displayed a strong commitment to not only NYC youth wrestling, but to the extended family that's been created by the NYC wrestling culture.

SITC raised over $27,000 for BTS! Team UPS was the top fundraising team with Columbia's Buck Wild Lions taking the Top Team position for the second year in a row. The top fundraising individual was Frank Cagnina of Team UPS and the "King of the Mat" was Matt Rappo of Team University of Pennsylvania.

Ken Bigley, the BTS Director of Program Development and the PSAL Wresting Supervisor, organized, wrestled for the Mid-American Conference (M.A.C) team, and announced at the event! The one-man show provided comedic relief at one point, as well, when he breathlessly returned to his announcing job after his first match, which had gone into overtime, and declared that the 2-minute matches should be reduced to 1-minute matches. The whole crowd booed Bigley's demise when he lost his second riveting match. Bigley was a definite crowd favorite of the day and deservedly so.

Bigley spoke very positively of the event. "The 2017 Step In The Circle was a fun way for former wrestlers to raise money for future wrestlers," began Bigley. "Despite the focus being on raising money, there were some very competitive matches. We had former national champions and All-American wrestlers, as well as  BTS alumni, Step Into the Circle which was great to see."

Bigley additionally described the participant he viewed as a one-man wrecking crew: "I was particularly impressed with Steve Santimauro. Steve is a former PSAL wrestler, a current Junior League Coach (fall season), PSAL Boys coach (winter season), PSAL Girls Coach (spring season), and PSAL Wrestling official. On top of all of that Steve raised over $2000 for Beat The Streets, and made the final of his weight bracket."

Bigley was extremely impressed with all of the teams and participating wrestlers, but Team UPS really shone through. "UPS is a great supporter of BTS-- this year Team UPS raised nearly $7,000 and had team members come all the way from Pennsylvania to compete," described Bigley.

Bigley rightly sees the future of SITC in a very optimistic light. "We are really looking forward to this event growing into both a major BTS fundraiser and a really fun wrestling social."

Steve Santimauro, who was wrestling for the Golden Knights wrestling club, said that he was at SITC because BTS has "done a ton for me as a coach, helped my kids tremendously... I'm trying to further that benefit for my kids."

Stefan Pryce, a wrestler with the Twin Towers wrestling club and BTS coach at Inwood Academy, described the growth of BTS and the wrestling culture that's grown because of it. "I remember being a wrestler at Hunter College when BTS started first started," he began. "I'd say the wrestling culture in NYC before BTS was nonexistent-- culture only came from already being part of a team or a club," said Pryce.

He continued, "But now BTS is fostering relationships that will last a lifetime. BTS is the melting pot for wrestlers in NYC. [As a result], it is impactful to see BTS reach the youngest kids. There was no wrestling before for the middle school or elementary kids in NYC. I actually got involved with BTS by being a coach for the Junior League."

He added that "Though my match didn't go well, it's motivating for me to get back in shape and have a better showing when I step back into the circle next year.""

Marcus King, a BTS alumnus who made his way to the Cruiserwight finals, wrestled with the Renzo Gracie wrestling club for SITC. King has come back to BTS by helping coach middle school teams and recently starting to help coach at Wingate, his alma mater."  "BTS was a stepping stone to me to get better as a wrestler and as a person,” said King. “I believe in coming back and giving... and I even get to wrestle on the mat, so it's a win-win situation."

Kevin Ramkishun, was another BTS alumnus who was wrestling with the Renzo Gracie team. He specifically described Beat the Streets as feeling like a family back when he was a Brooklyn Tech student-athlete"To give back and to know that kids can get the same treatment that [I] got is more than enough to make me come back to step in the circle," said Ramkishun.

Mark Rappo, wrestled with the University of Pennsylvania team, which acquired the second highest team score. Notably, Rappo was the highest scoring individual and walked away with the King-Kong themed Empire State trophy and SITC beer mug. “It was very fun. I'll be a little sore tomorrow but it was for a good cause," said Rappo. When asked if he'd want to come back next year he laughed as he showed off his trophy and said “Absolutely.”

Marcus Jones, who wrestled with Edge Hoboken and won the cruiserweight title, already knows that he wants to come back next year.  "I coach rec league kids for wrestling so I know [how important this is]. Supporting kids through this fundraiser is like supporting my own kids who I coach every single day."

From speaking to the participants, it was clear that they all felt strongly about how wrestling impacts youth and the importance of supporting youth wrestling opportunities in NYC. Whether they were young BTS alumni or wrestlers who hadn't worn their singlets in a while, all the participants knew what wrestling did for them, and as a result, wanted future wrestlers to experience the same benefits.

Thank you to all who wrestled and supported 2017 Step Into the Circle!

The Champions are as follows

The Crowdrise for this event can be found here.