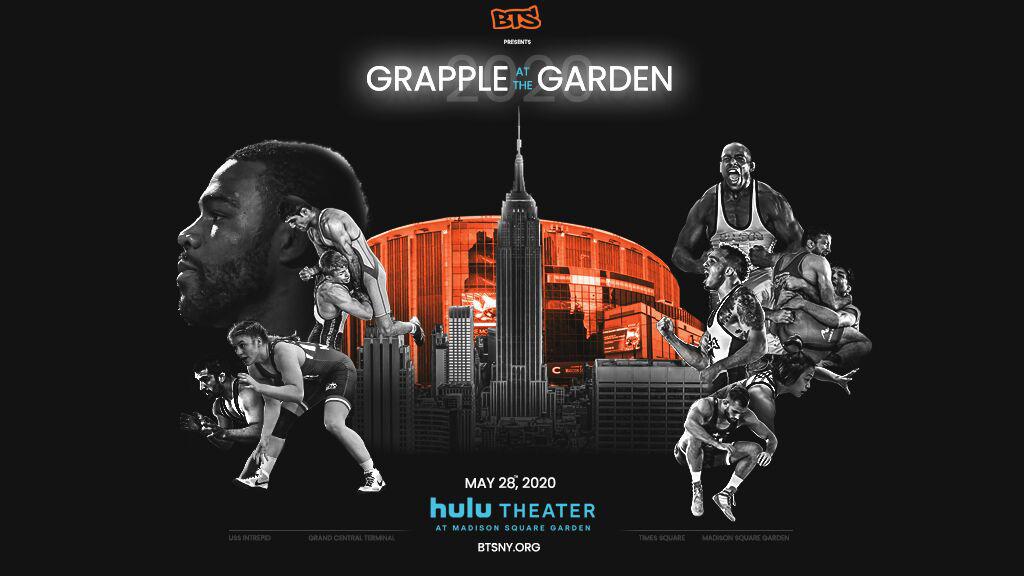 One of the highlights on the annual amateur wrestling calendar returns for the 11th straight year as Beat The Streets, the largest grassroots inner-city wrestling program in the United States, and USA Wrestling today announced that the annual BTS benefit will be held on Thursday, May 28.

The thrilling night of wrestling, dubbed “Grapple at the Garden,” will again be held at the Hulu Theater at Madison Square Garden after making a highly successful, sold-out debut there in 2019 following nearly a decade at various other iconic New York City venues.

The bouts will again be followed by the annual Benefit Celebration, which recognizes not only the elite athletes who compete at the event but also the BTS standout youth wrestlers who epitomize the work that the not-for-profit organization does year-round. Expected to compete are BTS wrestlers along with a national high school All-Star match-up, NCAA Champions and international Olympic men and women, and potentially mixed martial arts athletes who began as wrestlers.

Ticket information, as well as the athletes, matchups, schedule and broadcast details will be announced at a later date.

“We couldn’t have been more pleased with the response to our first year at Hulu Theater at Madison Square Garden,” said Beat the Streets Executive Director Brendan Buckley. “The sold-out crowd brought a non-stop energy, fueled by world-class wrestling action from top to bottom. We expect it will be an even hotter ticket this year with the Tokyo Olympics on the horizon.”

“The Board of Beat the Streets is excited to present another outstanding competition as we raise funds for the youth of New York City,” added BTS Chairman of the Board Ray Barczak. “The support we receive from donors, fans and others during our annual benefit allows us to achieve our mission. With more than 3,000 male and female student-athletes participating in more than 150 programs across the region, Beat the Streets is in its 14th year of changing lives and providing opportunities that truly make a difference.”

The first Beat the Streets Benefit was held on the U.S.S. Intrepid, an aircraft carrier docked on the west side of Manhattan. Since then, the benefit has taken place at other notable New York City spots like Grand Central Terminal and Times Square. Team USA has faced off against teams from around the world including Japan, Cuba, Russia, Iran and Canada, as well as international all-star teams. In 2018, the competition was hosted at the new Pier 17 in the Seaport District and included the highly anticipated Burroughs vs. Frank Chamizo (Italy) match.

About Beat the Streets

The mission of Beat the Streets is to develop the full potential of the urban youth and to strengthen the culture of New York City wrestling. BTS works directly with the New York City Department of Education in a public-private partnership to bring the life-changing sport of wrestling to over 3,000 New York City student-athletes to help them achieve their personal and athletic goals. Through the operation of wrestling programs in middle and high schools in the five boroughs, BTS and the DOE provide a safe, positive atmosphere in which disadvantaged and at-risk youth can learn the essential life lessons of grit, personal responsibility and teamwork, physical fitness and nutrition, and life-long learning. The goal of fostering strong, well-rounded student-athletes is delivered through coaching, after-school programs, life skills workshops, and summer camps. More information can be found at www.btsny.org.

USA Wrestling is the National Governing Body for the Sport of Wrestling in the United States and, as such, is its representative to the United States Olympic Committee and United World Wrestling, the international wrestling federation. Simply, USA Wrestling is the central organization that coordinates amateur wrestling programs in the nation and works to create interest and participation in these programs. It has over 250,000 members across the nation, boys and girls, men and women of all ages, representing all levels of the sport. Its president is Bruce Baumgartner, and its Executive Director is Rich Bender. More information can be found at TheMat.com