All entry fees will be reimbursed to competitors. 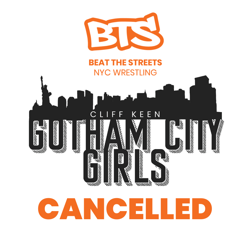 "Public health experts have been clear that limiting large public gatherings where there is potential for close contact is a critical way to slow the spread of this virus," New York State Health Department Commissioner Dr. Howard Zucker said. "This regulation will help keep people healthy and safe."

As such, Beat The Streets has cancelled the Gotham City Girls Open scheduled for April 10-11 in Greenpoint, Brooklyn.  This event will not be rescheduled for a later date, but we hope to hold Gotham again in the spring of 2021.

All entry fees to the event will be reimbursed in a timely manner.